Have you heard of Source Maps? Source Maps are an idea that has come out of Mozilla for addressing the debugging issues that are raised by *-to-JavaScript compilers and JavaScript minifiers, the problem is that when you use these you ultimately aren’t debugging what you wrote.

Take TypeScript for example and the improved version (original) of the PubSub from yesterday, we’ve got a problem, the code is quite different to what we’d be running in the browser. This is a big problem as if you’re not familiar with JavaScript, or at least not comfortable with the language nuances, you’ll quickly get lost and make a royal mess of what you’re writing.

Intelligently the TypeScript team have already done the hard work for us, there’s a Source Map generator in the compiler (thanks Ryan for pointing it out)!

So how do you use it? If you do a help dump of tsc (the TypeScript compiler) there’s nothing in it:

Well good news everybody, that’s not listing all the compiler switches ;). Check out the batchCompile method for a bunch of gems, but most importantly there is a sourcemap switch, so if I take my little project:

Now you’ll have two files, pubsub.js and pubsub.js.map and the output JavaScript file will also contain the source map pointer:

Sweet! Let’s open the HTML file in Chrome Canary (of which I’ve already enabled Source Maps) and we get some cool new debugging stuff:

You can find your .ts file in the sources list.

I’ve break pointed inside of TypeScript! 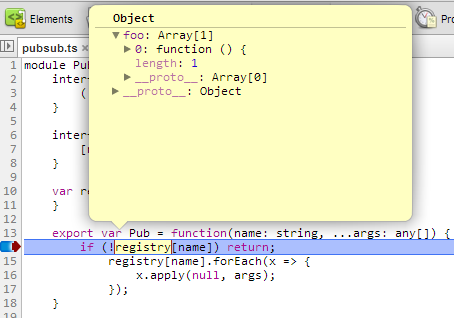 The fact that there was enough forward planning from the TypeScript team to include support for Source Maps in the initial release is a really great thing. Through the magic of Chrome we can debug code written in it as through it was our original code. If you want have a play here’s the code.

Hopefully either the Visual Studio or IE (or both) team also pick up Source Maps and add support for them too.

Indexes and Queries in db.js Interesting finds in the IE10 UA switcher