I’m playing around with a new project in which I want to use Azure Functions as the backend to a React UI and figured that it was finally time to learn that newfangled “GraphQL” (also, it’ll get Rob Crowley off my back as he’s bugged me about learning it for years! 😝).

For the project I’m building I plan to use Cosmos DB as the backing store, especially since there is a free tier now, so let have a look how we can connect all three of these things together, GraphQL, Azure Functions and Cosmos DB.

Note: For the purposes of this article I’m going to assume you are familiar with GraphQL and I won’t go over the semantics of it, just the stuff that relates to what we need to do.

To use GraphQL we’ll need a server and that’s what Azure Functions is going to be. After doing some research I found that Apollo has an integration with Azure Functions, so that’ll give us a nice starting point.

First thing we’ll do is create the Azure Functions project with a Http Trigger. Jump over to the command line and let’s create that (or use VS/VSCode, up to you):

This will scaffold up a TypeScript Azure Functions project and then setup a HTTP trigger that will be where our GraphQL server will be.

Note: If you want to use ‘plain old JavaScript’ rather than TypeScript just drop the --language flag from func init.

Now, we need to add the Apollo server integration for Azure Functions, which we can do with npm:

With the dependencies setup, let’s start implementing the endpoint.

Open up an editor (such as VS Code) and open graphql/index.ts. You’ll see the boilerplate code for the HTTP Trigger, let’s delete it all so we can start from scratch. While this is a HTTP Trigger as far as Azure Functions is concerned we’re going to be hiding that away behind Apollo, so we’ll start by importing the Apollo Server and GraphQL tools:

Then, we can define a basic schema:

And lastly, export the handler for Azure Functions to call:

But before we can run it there’s one final step, open up the function.json and change the name of the http out binding to $return, making the functions.json look like so:

This is required as Apollo will return the value to Azure Functions rather than using a passed in argument that you set the body on. My guess is so that they don’t have to have too much tying the core to how Azure Functions works.

Launch the Functions (F5 in VS Code or npm start from the CLI) and navigate to http://localhost:7071/api/graphql where you’ll find the GraphQL playground. Type in your query, execute the query and tada, we have results! 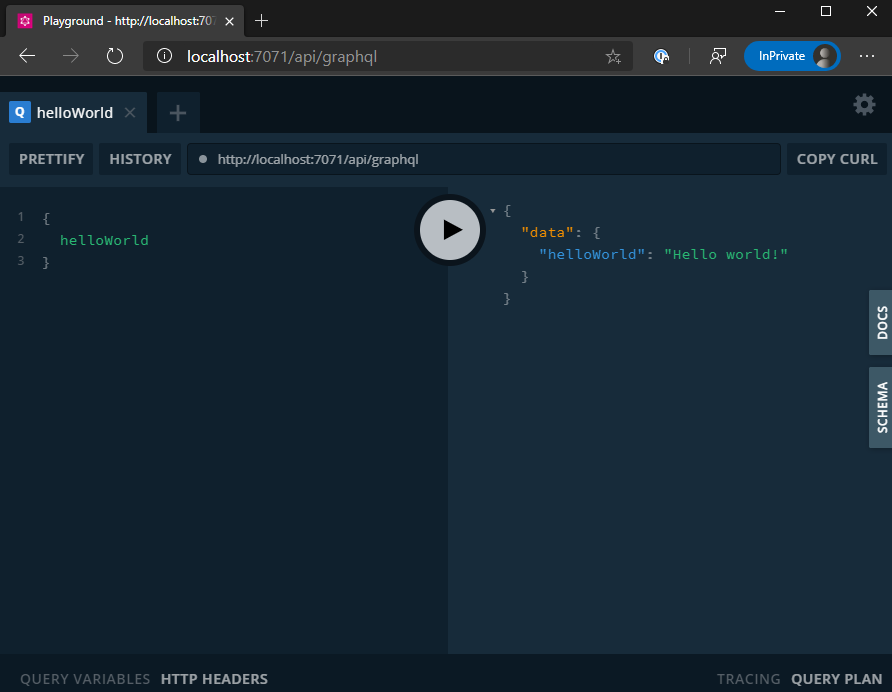 We probably don’t want the Playground shipping to production, so we’d need to disable that. That’s done by setting the playground property of the ApolloServer options to false. For that we can use an environment variable (and set it in the appropriate configs):

Given that we’ve proven that we can integrate GraphQL with Azure Functions we can now start to do something more realistic than returning hello world, and for that we’ll talk to Cosmos DB. Functions has bindings to Cosmos DB but as we’re going to be doing some dynamic queries we’ll manage the connection ourselves rather than doing automated bindings, and for that we’ll loosely follow the Cosmos DB tutorial on docs.

Note: If you don’t want to spin up a resource in Azure you can use the Cosmos DB emulator.

Start by adding the Node module for Cosmos DB:

Then it’s time to update our Function to use it, so back to index.ts and import CosmosClient:

With this we can create the connection to Cosmos DB:

Since, we don’t want to commit our Cosmos DB connection string to source control I’m expecting it to be passed in via the AppSettings (when deployed) or local.settings.json locally.

Aside: I’ve decide to cheat when it comes to making the Cosmos DB, I’m using the database from www.theurlist.com which was created by some colleagues of mine. You can learn how to create it yourself, see how they migrated to Cosmos DB Free Tier and grab the code yourself. But feel free to use any Cosmos DB you want, just model the GraphQL schema appropriately.

So far our GraphQL query has been just a silly static one, but we want to model our actual Cosmos DB backend, or at least, what of the backend we want to expose, so it’s time to update the schema:

With these changes done we can restart the Functions host and open up the Playground again to try a more complex query. 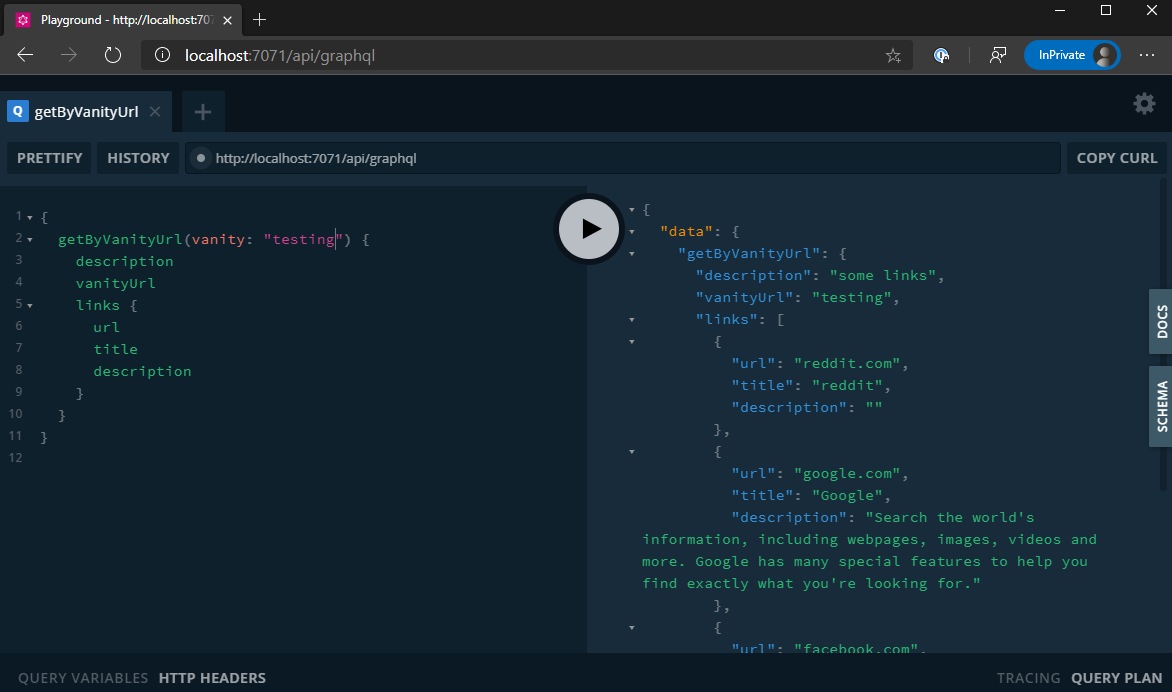 And there we go, we’ve created a GraphQL server that is running inside an Azure Function, talking to Cosmos DB. One thing to be aware of, at least in the way that I’ve approached it, is that we’re potentially pulling more data back from Cosmos DB than we need through our SELECT statement, since the client can choose to drop fields that they don’t need in the response. If this is a concern you could take a look into selection set of the query and dynamically build the SQL statement, but that could be risky, so it’d be something you want to test and optimise for, rather than doing upfront.

Ultimately, I hope that this gets you started in doing GraphQL in Azure Functions. 😊

Getting Started Learning Docker A Walk Through of My Terminal Setup