Last year I wrote a post about how I implemented an overly complex approval workflow with GitHub Actions. While it wasn’t the simplest solution, at the time it was a means to an end as we didn’t have any built-in way to do approval workflows with GitHub Actions. At the end of last year that changed with the introduction of Environments (announcement post). Environments bring in the concept of protection rules, which currently supports two types, required reviewers and a wait timer, which is exactly what we need for an approval workflow.

So with this available to us, let’s look at taking the workflow to publish GitHub Packages and turn it into an approval-based workflow.

Navigate to the GitHub repo you want to set this up on and then go to Settings -> Environments. 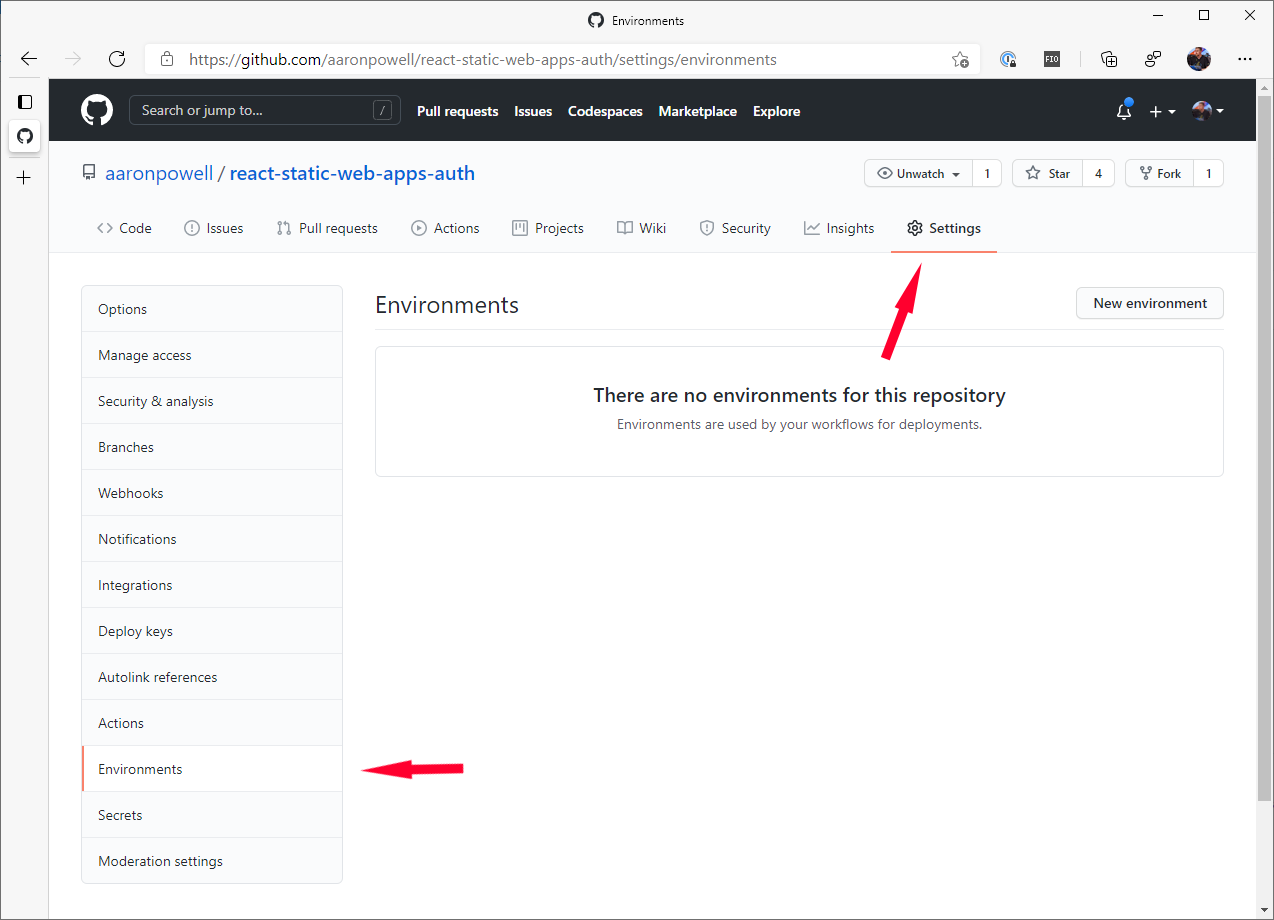 From here we can create new Environments. You can make as many as you need, and you can have different sets of environments for different workflows, they don’t have to be reused or generic. We’ll create two environments, one called build, which will be the normal compilation step of our workflow and one called release, which will have the approval on it and used to publish to our package registry (I’m using npm here, but it could be NuGet, or anything else).

On the Configure release screen we’ll add a protection rule of Required reviewer, and I’ve added myself as the person required, but set whoever is the right person for this environment (you can nominate up to 6 people).

Remember to click Save protection rules (I kept forgetting!), and your environments are good to go.

It’s going to be triggered on a new version tag being pushed, which I like to do manually.

We’ll start by associating the build job with the Environment:

Note: you can ignore the working-directory default, I need that due to the structure of my Git repo. It’s left in for completeness of the workflow file at the end.

Now we can add the steps needed:

Here we’re using actions/create-release to create a Release on GitHub and setting it to draft, as it’s not yet approved. This step has an id set, create_release, which is what we used to get the release URL for the Environment output and will need to upload artifacts shortly.

You can add the appropriate build/test/etc. steps after this one, again this is an example with a JavaScript project and I’m using npm, so change to your platform of choice:

With this step we’re generating the package that will go to our package registry, but since we’re not publishing yet (that’s a future jobs responsibility), we need a way to make it available to the future jobs. For that we’ll publish it as an artifact of the workflow, using actions/upload-artifact:

It’d also be good if the Release we’re creating had the package attached to it, if people want to download it rather than use a package registry, and we can do that with actions/upload-release-asset. The only problem is that we need to find out the full name of the package, including version, but that’s dynamic. To tackle this I create an environment variable containing the tag, extracted from GITHUB_REF using some bash magic:

Again, we’re using the create_release step output to get the URL needed to upload the assets, another reason why you need to give that step an id.

The last thing that this job needs to do is let the future ones (in particular release) know what the id of the GitHub Release is, so it can publish it from draft. It doesn’t look like the step outputs are available across environments (and this is something I also hit with Azure Pipelines), so the solution I have for this is to put it in a text file and upload it as an artifact of the build.

build is done, time for release.

Like build, the release stage needs to have an environment node that references the correct Environment name, this is how GitHub will know to apply the protection rules for you. But since this Environment doesn’t have any output, we’re not going to need to set a url property.

You’ll also notice the needs property in there as well. This tells us that this job can’t run until build has completed, which makes sense as we’re waiting on some outputs from there.

This phase of our workflow will only be responsible the draft status from the GitHub Release, and to do that we’ll need to call the GitHub API and tell it which Release to edit, so we’ll need to artifact that we published at the end of the last job.

We download the artifact with actions/download-artifact and then export the context of the text file as an environment variable called release_id. Then, in the actions/github-script step we’ll use the updateRelease operation. Since actions/github-script is running as a JavaScript script, to access environment variables we can use process.env, and that gives us access to process.env.release_id as needed.

With this complete, our release is no longer in draft and we can publish the packages to their respective registries.

Publishing to npm and GitHub Packages

I’ll only show the workflow steps for npm here, as GitHub Packages is virtually the same and can be read about in this post.

This part of our workflow is rather straight forward since we’ve already built our package, all that’s left to do is download the artifact from the current run and publish to npm.

As we have the tgz file, we don’t need to repack, we’ll just pass the filename into npm publish (obtained from ls *.tgz), and since it’s a scoped package that everyone can use, we are setting the access to public.

With the new workflow ready to run, all it takes is a push with a tag for it to kick off. When the build phase completes, the reviewer(s) will receive an email and a notice on the Action in the GitHub UI.

Approve it, and the rest of the stages will run through to completion (hopefully…).

Throughout this post we’ve created a new GitHub Action workflow that will build and release a package, but still give us the safety net of requiring a manual approval step before it is ultimately released.

You can find the successful run I demonstrated here on my own project, and the commit diff from a previous project that released to npm automatically.

Have you had a chance to implement anything using the approval process in GitHub Actions? Let me know as I’d love to see what else people are doing with it.

2020 a Year in Review Extending the GitHub CLI