OpenAPI, formerly known as Swagger (or still known, depending who you ask!), is used to describe a REST API’s

Last year my colleague Justin Yoo released an extension for .NET Azure Functions to generate OpenAPI definitions and not long afterwards he reached out to me on whether it’d be possible to do something similar for JavaScript/TypeScript Functions.

Well, good news, I’ve created a npm package to do that, which you can find on GitHub and in this post we’ll take a look at how to use it.

This npm package works conceptually similar to the .NET one in that you annotate the Function handler to provide OpenAPI schema information. This is done using a wrapper, or higher order, function, which takes a JavaScript object in that represents the schema for OpenAPI.

The second part of the plugin is used to create an endpoint which the OpenAPI spec file will be exposed via.

Also, the package will give you the option to use each of the different spec version, v2, v3 and v3.1, so you can describe the API in the way that’s right for consumers.

Let’s look at how we can annotate a Function to expose an OpenAPI spec, and we’ll look at the Trivia Game example, specifically the game-get API.

Note: The Function handler doesn’t really matter as there’s (at least currently) no inspection of it being undertaken, JavaScript doesn’t have enough of a type system to do runtime reflection and figure that stuff out on the fly, so I’ll keep that abbreviated for the sample.

We’ll use the OpenAPI 3.1 spec, which is the latest at time of authoring, as the schema, so the first thing is to import the mapping function:

Next, we’ll change the export default to be a call to the mapping function, rather than the Function handler itself:

The mapOpenApi3_1 (aliased as openApi in my sample) takes three arguments:

Note: If you’re using TypeScript, you’ll get type help as you build out your schema, thanks to the openapi-types npm package.

This Function will respond on a GET request, expect the gameId to be a URL parameter and return a 200 when the game is found or a 404 if it is not, so we can describe that in our object. Let’s start with the parameter:

The top level of the object is the verb that we’re going to be working with (you can define multiple verbs for each Function) and then we use the parameters array to describe the parameter. The gameId is being describe as required and that it’s a string, plus we can attach some metadata to it if we desire, I’m giving it a description for example.

Now we can define some responses. Let’s start simple with the 404:

Here we’ve added a new responses property and we can define any status code we want as the response code and attach info to it. Since this was a 404, all I’ve done is defined the description as it won’t return a body. For a more complex one, let’s put in the 200:

The 200 response will have a body and that is defined in the content property, in which you can set the content for the different possible mime types. I’m only supporting a mime type of application/json, so that’s all that’s defined and for the content it returns we’re using a schema reference to a component defined elsewhere in our spec. This is useful if you’ve got objects that can be used in multiple places, which the Game time would likely be (it’s shared between GET and POST in the sample).

But that’s the first part completed, we’ve defined the spec information for our game-get API, on to creating the endpoint that will make it available to us.

We’ve got to the effort of annotating our Function but there needs to be some way in which consumers and get that, and to do that, we need to create a Function for them to access it. Start by creating a new HTTP Trigger Function, delete it’s contents and then we can use another helper function from the npm package:

With this Function we’re going define the shared metadata and components that our OpenAPI spec requires, as it’ll be merged with the annotated Functions at runtime. Start by telling consumers about the API:

And there you have it, Game is now defined and can be used as a reference elsewhere within our spec. You can find the full implementation with all other schema objects in the GitHub source.

Start up your Azure Functions (with CORS enabled) and pop the spec endpoint into Swagger UI and you’ll see your docs generated! 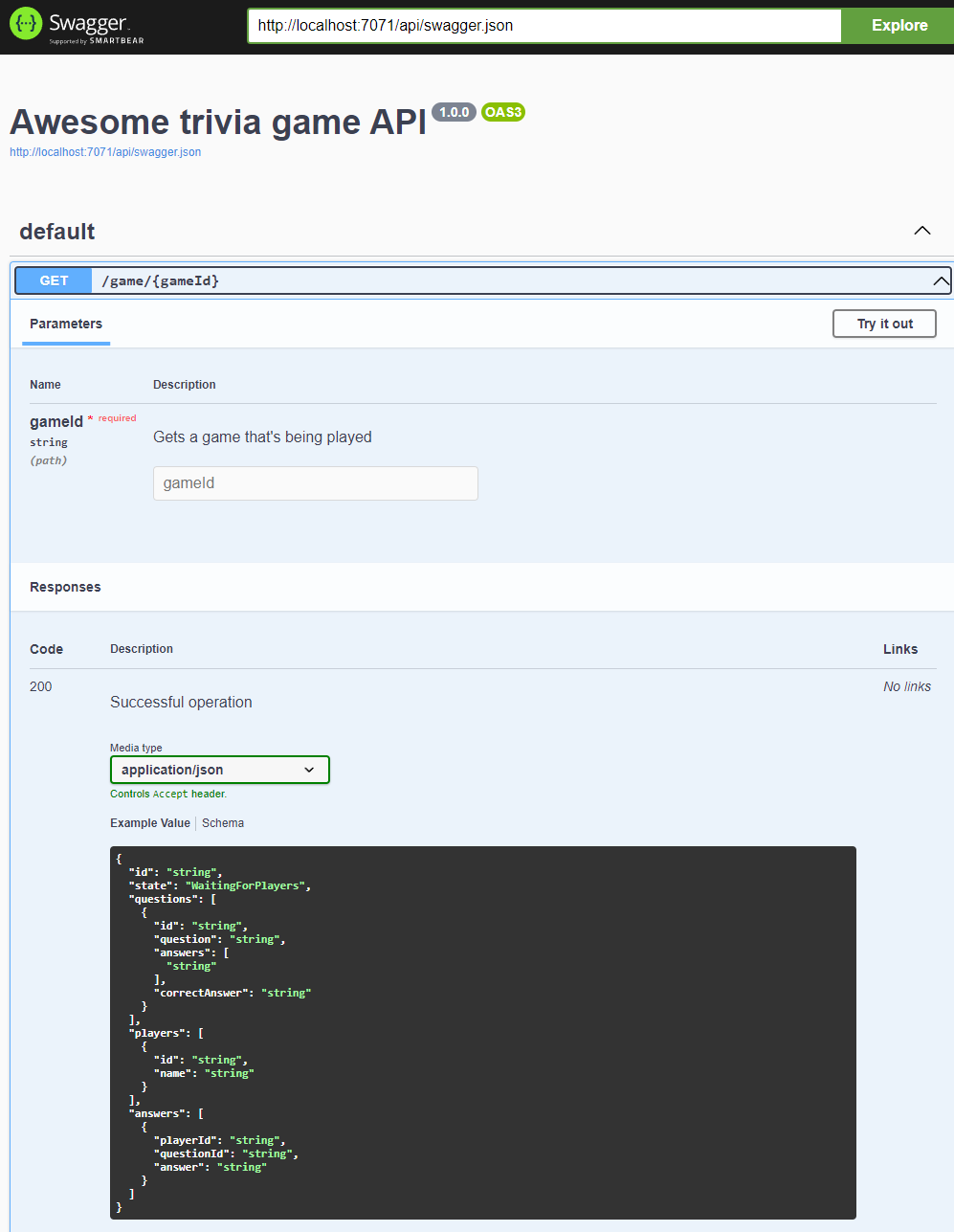 There we have it, a working app in Azure Functions which provides OpenAPI docs for anyone who wants to consume them.

Right now this is a proof-of-concept project more than anything, and we’re looking for feedback on whether this is a useful tool to have for people creating Azure Functions in JavaScript/TypeScript or whether there’d be a better solution, so if you want to give it a try take the npm package for a spin and get in touch.

I have ideas of things to do next, but I’m more keen to solve the problems that you’d experience with it first.