Today my wife and I received the following email from our builder: 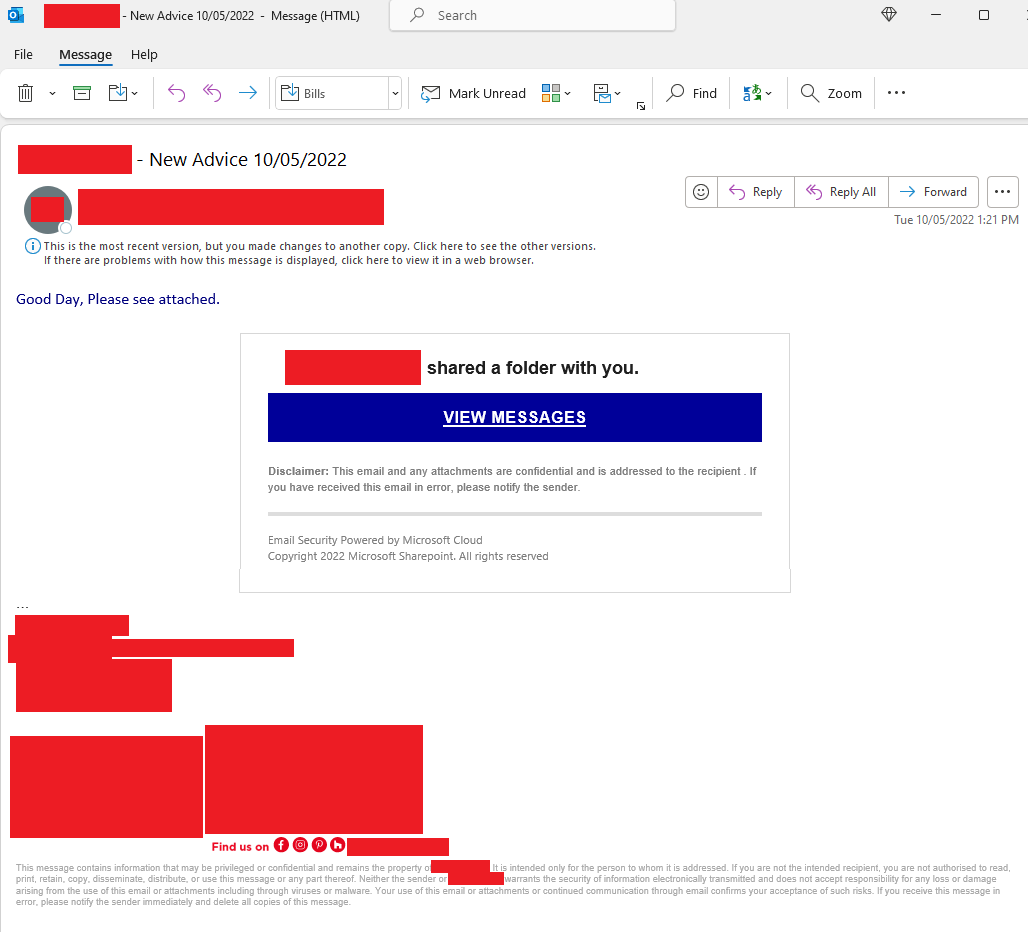 Well, more specifically, we received it from the sales consultant at the builder who we did the initial tender through about 2 years ago and haven’t been in contact with since.

So, getting an email from them seemed somewhat weird, but at the same time, we’re just about finished with our build so we thought it might be some closing paperwork.

But it wasn’t, it was a phishing attack, and a pretty darn impressive one at that. If you look at the email you’ll notice (redacted) email footer with disclaimer, this was all correct details, down to the mobile phone number of the individual and the text in the disclaimer, it all matches with previous emails we’d had.

The email came into the joint email account my wife and I share, I didn’t read it but she asked me why she couldn’t access it - she needed the password to the joint account to do so. This triggered a red flag with me so I decided to have a look at it.

What really got me about this was just how real the email looked, it’s attempting to mimic the information rights management (IRM) of M365 which allows you to share a document from our SharePoint environment to someone outside of your organisation. It works by sending them back to your M365 tenant where you have to provide an access token and your email (token is emailed separately) to then give you access to the document.

It’s really cool tech for allowing a company to share sensitive content to people outside of their organisation in a trusted way, and still hold onto the trust aspect, rather than just emailing attachments which you can’t track ownership of, or be sure they haven’t been intercepted in a person-in-the-middle attack.

But it seemed a bit off with the text in the email, Good Day, Please see attached.. This is not the best english and the use of capitalisation seems off, indicating that something isn’t quite right about it.

There’s a big View Message button in the middle, which you’re obviously meant to click, and this is the start of the attack. Hovering over the link it clearly wasn’t right, it was going to https://8097685657-evkpl8.codesandbox.io/?email=.

I’m pretty confident that M365 IRM isn’t running on codesandbox.io, but let’s take a look at it anyway. 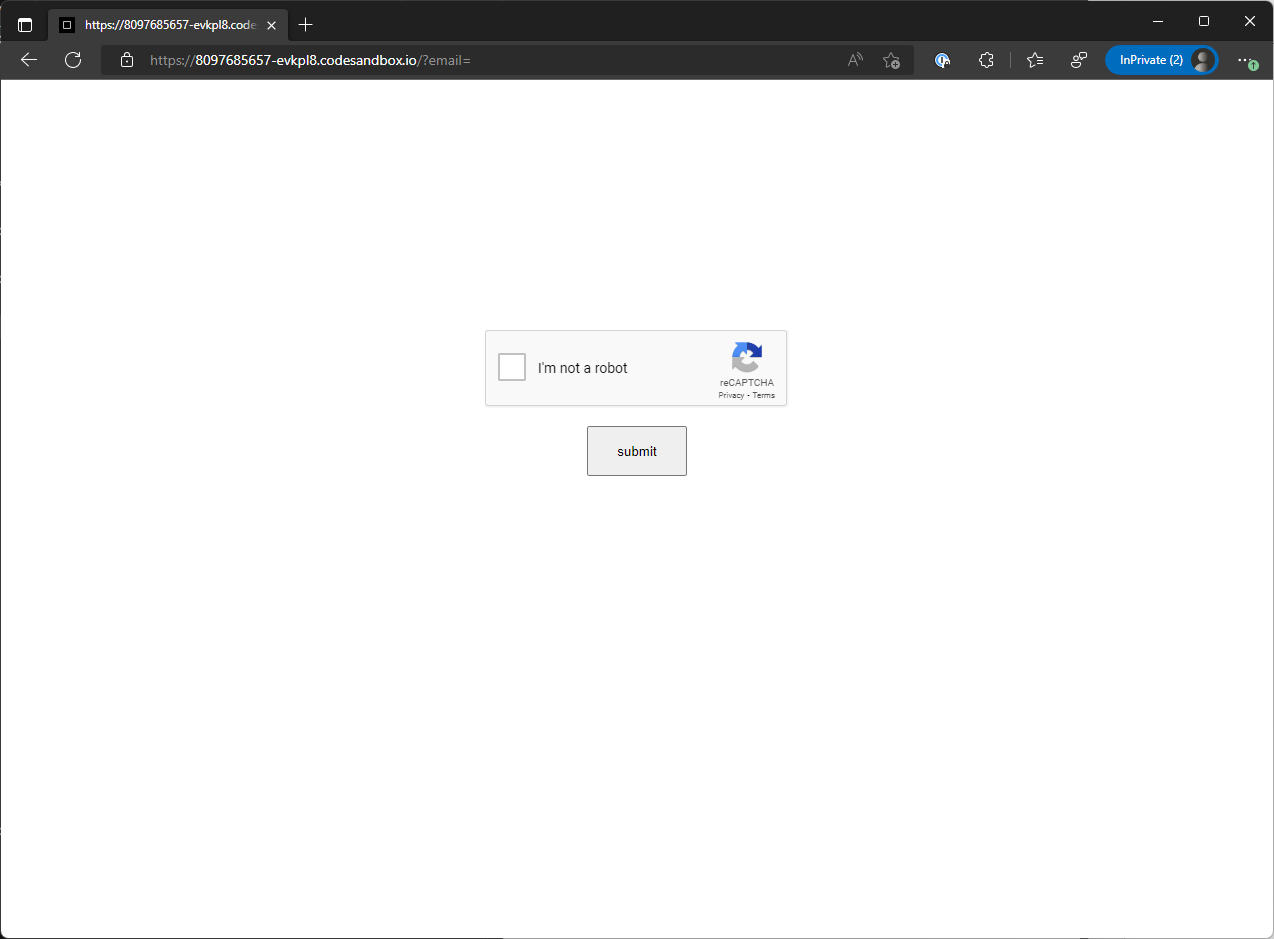 Ok, interesting, a ReCapture challenge and a submit button, that’s not that interesting. I popped the browser devtools and had a look around, still, nothing that interesting, but given it’s on codesandbox, we can have a look at the raw files at https://codesandbox.io/s/8097685657-evkpl8.

Digging through the code

There’s four files in the “app”, a package.json and sandbox.config.json, both of which were clearly just generated from a basic template, then there’s the index.html that we get served:

So it’s looking at the email query string and then loading up another website in an <object> tag, which it full screens. This means that the page https://contelis.com.br/wp is really where the code lives.

It’s been a long time since I’ve written PHP but my understanding of the code is that it looks at the email address, and if it’s a “microsoft” property, you get redirected to one site, otherwise you get directed to a different site, all using the Location header… although if I understand the code right, you end up at the same site regardless, and both sites seem to be on codesandbox as well, as csb.app is the short link that they use.

Following that link lands you at an identical codesandbox by the same author, so I’m unsure exactly what the point of it is, my guess is that it’s only part of a file, maybe the one of contelis.com.br.

Speaking of page at contelis.com.br, it’s really simple HTML, all it’s doing it loading up ReCapture and interestingly enough, the actual ReCapture, not some mock up, so you can fail it!

There’s no <input> fields on the page, so you’re not going to be submitting any new data to the server, so my guess is that there’s something server-side that I can’t see, probably storing the value of the email query string. I also do like the use of the <br> tag to add whitespace, plus a <center> tag - HTML at its finest!

This is about as far as I was about to dig through and it left me wondering just what the point of this phishing attack was. My guess is that it’s being used to harvest email addresses and verify that they are legit by looking at who clicked through the email, essentially, generating a database of “gullible fools” that would click on this sort of thing.

But looking at the email source the query string was never set, meaning that the point of capturing the email by using the information on the click through never did work - it was just not there, so I’m a bit at a loss.

The other thing I found fascinating is the level of sophistication in the email, down to the footer with contact details of the original victim and that the email headers suggest it came from the building companies systems. This suggests that it was probably done through a virus on the original victims machine, rather than a random phishing service.

We contacted the builder and informed them of the email and a few hours later an email from the CEO went out addressing it and apologising, so I’m glad they acknowledged the problem.

I’ve also reported the account to codesandbox, so it’ll be up to them to take it down.

Overall, it was a bit of fun pulling this little attempt at phishing me apart.